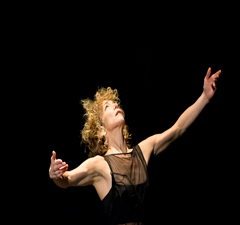 HEIDIY LATSKY (Artistic Director  /Choreographer / Performer), originally from Montreal, first received recognition as a celebrated principal dancer for the Bill T. Jones/Arnie Zane Dance Company (1987-1993). Since then she has been a choreographer for stage, theater and film.  Latsky has a BA in Psychology with Honors from Carleton University (1979). There, she received the Senate Medal for Outstanding Academic Achievement and The Ottawa Ladies College Scholarship. Other awards include the Scripps/ADF Primus-Tamaris Fellowship for Choreography and the McGinnis Lectureship Award from Point Park College.

In 1996, she was chosen to represent Canada at the Suzanne Dellal International Dance Competition in Tel Aviv and at Danse a Lille, France. Latsky has toured extensively throughout the United States and Europe with her own company and as part of Goldhuber &  Latsky (with former partner Lawrence Goldhuber).  Her choreography has been commissioned by the Cannes International  Dance Festival, The American Dance Festival, Danspace Project, Whitney Museum of Art, The Joyce Theater and other prestigious venues. Educational residencies include The American Dance Festival, Beloit College, Skidmore College, the University of Wisconsin at Madison and Milwaukee, Connecticut College and Purdue University.

Latsky headed the Movement Department at The School for Film and Television from 1998-2005 where she developed her teaching practice-The Latsky Method. Latsky worked with Theater Director Mary Fulham, for whom she has received two Innovative Theater Award nominations. She serves on the Artist Advisory Board of Danspace Project and in 2009 was chosen by Creative Capital Foundation as one of four choreographers nationally to receive an award for her evening length work GIMP for three years.  She recently was guest lecturer at Harvard University, performed at Boston's ICA with Bill T Jones' alumni  in "SUMMER REUNION", restaged a piece of Arnie Zane's at the University of Wisconsin/Milwaukee, created a work at the Aaron Academy  for high school students with learning disabilities, and performed at Boston's Oberon Theater with singer /songwriter Jonatha Brooke. HEIDI LATSKY DANCE (HLD) was formed in 2001.

The Company has enjoyed performances at venues including Bryn Mawr College, the Duke on 42nd Street (produced by the 92nd Street Y Harkness Dance Center), Central Park Summerstage, Symphony Space, and Joe's Pub and has been a recipient of residencies from the Joyce Theater Foundation, Baryshnikov Arts Center, Abrons Arts Center and the JCC in Manhattan.

GIMP is the subject of a feature length documentary by Richard Move, an Associated Press multi-media piece, and features on CNN, NET and NPR. A profile on GIMP  (Channel 12 News) was nominated for an Emmy Award in 2010. That same year, the company was in residency at the JCC Manhattan where they created IF which was then presented as part of Lamama Moves Festival at the Ellen Stewart Theater NYC. Recently, IF was restaged for Cleveland's Dancing Wheels Company. Currently, Latsky is working on two new works which in excerpted form have been shown at venues like the Reelabilities Film Festival, University of Rochester, Rutgers University, StonyBrook University. Heidi performed at TEDWomen in Washington, DC this past December. During her company's 2013 season, Heidi has performed at Reelabilities: NY  Disabilities Festival and at the Fashion Institute of Technology with SOMEWHERE and SOLO COUNTERSOLO which will be produced the week of June 24th at the Baruch Performing Arts Center. Heidi has continued her work as an adjudicator of the American College Dance Festival Association's (ACDFA) 2013 East-Central Conference in Rochester, Michigan.